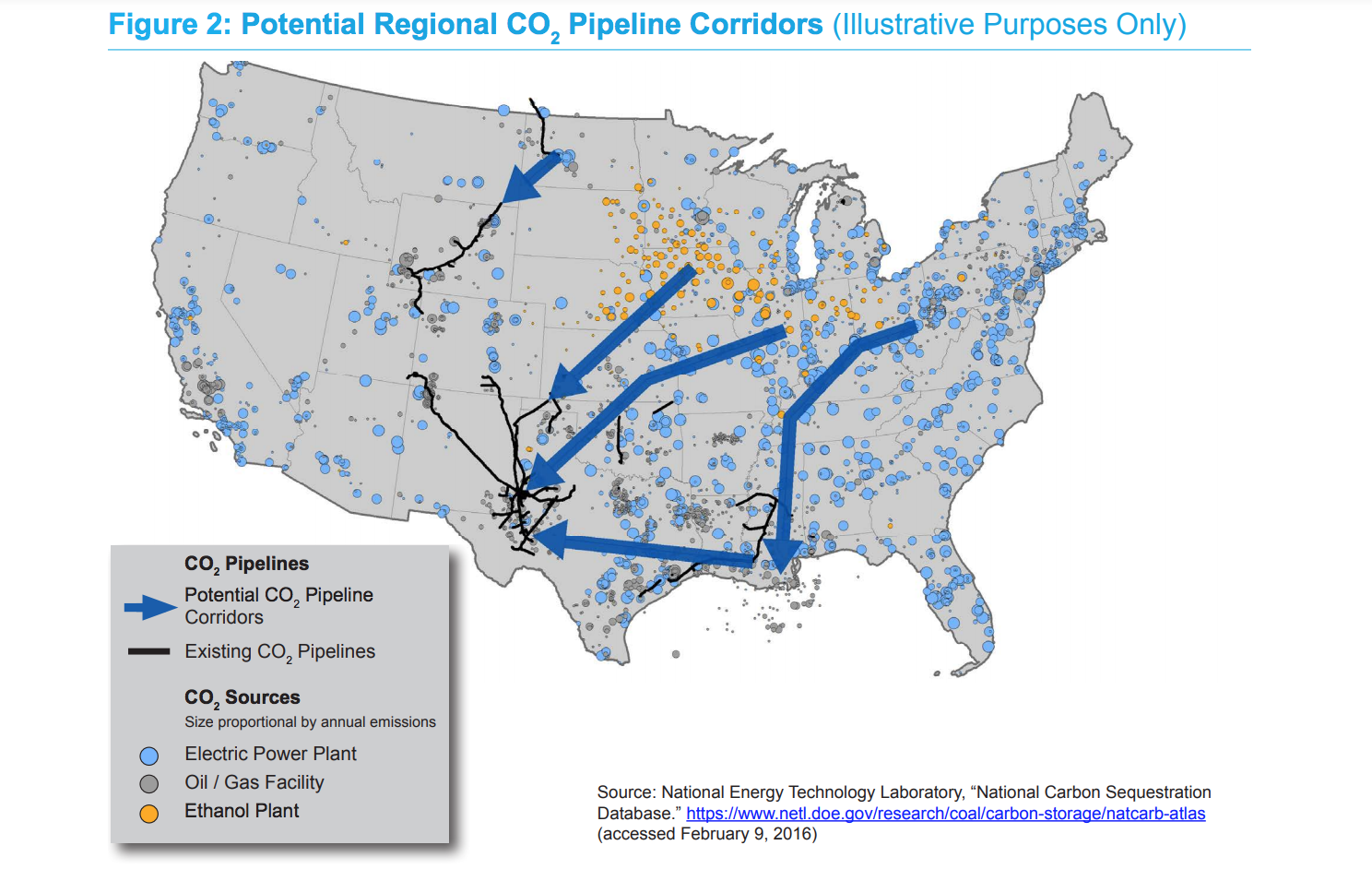 Despite occupying center stage in the “net-zero” climate plans trumpeted by the United States and Canada at the Leaders’ Summit on Climate, government spending programs, and bills pending before Congress and Parliament, carbon capture is not a climate solution. On the contrary, investing in carbon capture delays the needed transition away from fossil fuels and other combustible energy sources. It poses significant new environmental, health, and safety risks, particularly to Black, Brown, and Indigenous communities already overburdened by industrial pollution, dispossession, and the impacts of climate change.

The organizations’ message is clear: carbon capture is unnecessary, ineffective, exceptionally risky, and at odds with the needed energy transition and the principles of environmental justice. “Carbon capture and storage is not a climate solution,” the groups say. “It is a dangerous distraction driven by the same big polluters who created the climate emergency.”

“We don’t need to fix fossil fuels; we need to ditch them,” signatories said. Sinking public funds into CCS technology, they warn, only prolongs reliance on fossil fuels and delays their replacement with cheaper renewable energy alternatives. Worse still, captured carbon drives more oil production through enhanced oil recovery, contributing to the very climate crisis the technology purports to solve. “Instead of bankrolling CCS,” the letter declares, “public funds should be boosting sustainable, job-creating solutions to the climate crisis, for fossil-dependent workers and communities: phasing out oil, gas, and coal; investing in energy efficiency and non-combustion renewable energy sources; and protecting forests and other ecosystems that naturally capture and store carbon.”

The letter’s key messages and demands were published as full-page advertisements in The Washington Post and Ottawa’s Hill Times newspapers:

Carbon capture and storage, or CCS, and carbon capture, utilization and storage, or CCUS, are processes designed to collect or “capture” carbon dioxide generated by high-emitting activities and then transport those captured emissions to sites where they are used for industrial processes or stored underground. While both are proposed as technologies to meet global energy and climate goals, CCS and CCUS will not address these core drivers of the climate crisis or meaningfully reduce greenhouse emissions, and should not distract from real climate solutions.

Why Carbon Capture & Storage is Not a Climate Solution

Carbon Capture & Storage has recently become a cause for concern in Nebraska and nearby states for the coalition of landowners, Tribal Nations, and environmental advocates that quashed the proposed Keystone XL tarsands pipeline project that threatened the land, water, and climate.

The Omaha World-Herald reports that “the groundwork was laid by State Sen. Mike Flood’s Legislative Bill 650, which all but one legislator voted to pass last month. Since then, multiple companies have announced plans to contract with ethanol producers in Nebraska to filter carbon dioxide and permanently store that element in the ground — either in the state or piped elsewhere… “Grand Island-based Chief Industries confirmed in a press release last week that it has entered into a partnership with Catahoula for carbon sequestration via its Chief Ethanol division in Hastings. Battelle is currently researching storage sites. In Nebraska, the most promising areas are in the central and western parts because the higher elevations create deep rock reservoirs.”

The World-Herald also reports that “another company, Navigator CO2 Ventures, plans to build a pipeline network encompassing 1,200 miles that would take liquified carbon dioxide from Nebraska and four other states and store it deep underground in the Mount Simon Sandstone Formation in central Illinois… Navigator CEO Matt Vining told OWH the proposed pipeline would be centered in Iowa but extend into northeast Nebraska, eastern South Dakota and southwest Minnesota, and that the company expects to spend in excess of $2 billion to build the pipeline, which would become active in late 2024 and early 2025. Vining told OWH Navigator will spend the next few years gathering information and seeking government permits.”

Meanwhile, Grist reports that “Summit Carbon Solutions, a spinoff of an Iowa-based agricultural company, recently announced it is developing a $2 billion pipeline project that will carry carbon dioxide captured from ethanol refineries scattered across the Midwest to a site in North Dakota where it will be pumped thousands of feet underground.”

Grist also notes that, “in a report released last year that looked at how the U.S. could achieve net-zero emissions by 2050, Princeton researchers found that success depends on a new national network of CO2 pipelines — potentially 70,000 miles worth.”

As more data on the first-ever CCS/CCUS projects to launch in the U.S. come in, there is even less reason to support a gigantic investment in what is an increasingly unproven technology that fails even its flawed goal of “sweeping the problem under the rug.”

Industry publication Upstream reported on July 20 (“Blow for CCS: Chevron’s giant carbon capture project falling short of targets”) that Chevron’s Gorgon project is projected to capture just 30% of the CO2 it promised, yet, “under the terms of Gorgon’s project approval, Chevron is required to sequester at least 80% of the CO2 emissions released from the reservoirs that feed the Gorgon LNG plant over a five-year period. While the first train at Gorgon came online in 2016, issues with the CCS facility did not see it start up until 2019 and continued issues have prevented the facility from operating reliably. The facility is designed to capture 4 million tonnes per annum of CO2, however, Chevron confirmed Monday that only 5 million tonnes of CO2 had been injected since the August 2019 start-up… “It’s a shocking failure of one of the world’s largest engineering projects. But, given the lack of rigour and testing around the technology that was used, I cannot say it is unexpected,” Ian Porter, chairperson of renewable energy think tank Sustainable Energy Now, told UpstreamOnline.

Is President Biden Pushing the False Solution of CCUS on Americans?

Unfortunately, the Biden Administration is actively greasing the wheels for the false climate solution of Carbon Capture & Storage and the massive amount of new pipeline construction it would require — along with the countless eminent domain battles with landowners unwilling to allow risky CO2 pipelines across their farms and ranches.

E&E News reports that Energy Secretary Jennifer Granholm, while visiting a Houston hydrogen energy plant on June 1, said, ” ‘At the Department of Energy, we’re not against pipes,’ adding that the administration views green energy and decarbonization — which will require pipes to move carbon dioxide — as a way to create jobs. ‘We want to build more pipes,’ she said, noting they will be used to move hydrogen as well as CO2. ‘There’s a lot of jobs that are associated with decarbonizing … and I think pipes are one of those opportunities.’ ”

“An organization run by former Obama-era Energy Secretary Ernest Moniz, with the backing of the AFL-CIO, a federation of 56 labor unions, has created a policy “blueprint” to build a nationwide pipeline network capable of carrying a gigaton of captured carbon dioxide (CO2),” DeSmog reports. “The “Building to Net-Zero” blueprint appears to be quietly gaining momentum within the Energy Department, where a top official has discussed ways to put elements into action using the agency’s existing powers. The pipeline network would be twice the size of the current U.S. oil pipeline network by volume, according to the blueprint, released by a recently formed group calling itself the Labor Energy Partnership.”

Law360 also reported on “a recent Internal Revenue Service ruling that clarifies how multiparty ownership affects eligibility for the carbon sequestration tax credit should accelerate the pace of project financing transactions that were held up by lingering uncertainty, and should increase the pool of projects into which tax equity will consider investing.”

ACTION: What Can Pipeline Fighters & Water Protectors Do?

A number of local, regional, and national organizations meeting to discuss the growing concerns with the Biden Administration’s plans for expanding Carbon Capture & Storage and CO2 pipelines has coalesced around calling for a National Moratorium on CO2 pipelines.

Why Do We Need a Moratorium on CO2 Pipelines?