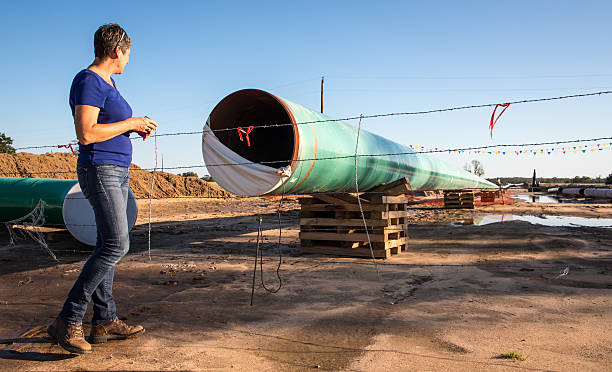 As landowners and counties are being inundated with carbon pipeline companies wanting to take land by eminent domain, a common concern raised by many county officials is whether or not federal law allows their county to impose setbacks on pipelines. The short answer is that it depends on the type of pipeline.  The federal Natural Gas Act (NGA) does preempt county setbacks for interstate natural gas pipelines, but this act does not apply to oil and CO2 pipelines. Instead, no federal law authorizes the federal government to generally determine the route or location of an oil or CO2 pipeline. More specifically, the federal Pipeline Safety Act does not prohibit county setbacks for or county routing of oil and CO2 pipelines.

“(e) Location and routing of facilities. –This chapter does not authorize the Secretary of Transportation to prescribe the location or routing of a pipeline facility.”

Since setbacks relate to the location of a pipeline, federal law prohibits PHMSA from requiring or prohibiting setbacks or otherwise dictating the location or route of a pipeline.  This means that PHMSA cannot examine route alternatives and pick the safest or order a pipeline developer to stay away from sensitive locations, such as schools, nursing homes, or hospitals.

The mistaken belief that the federal government regulates setbacks appears to be based on a misinterpretation of Section 195.210 of the federal pipeline safety regulations (49 CFR § 195.210).  This regulation contains two short provisions, subsections (a) and (b), both of which appear to regulate the location or route of a pipeline.

Subsection (a) states in full:

“(a) Pipeline right-of-way must be selected to avoid, as far as practicable, areas containing private dwellings, industrial buildings, and places of public assembly.”

If the Department of Transportation can’t regulate location or route, how could it have issued this regulation?  The answer lies deep in the history and timing of the many amendments to the Pipeline Safety Act and the regulations issued under it.

The federal government first issued subpart (a) with this exact language in 1981.  46 FR 38357, 38366 (July 27, 1981).  In contrast, the statutory language in 49 USC §60104(e) prohibiting the Department of Transportation from determining the route or location of a pipeline was enacted by Congress on July 5, 1994, in Public Law 103-272, 1994, 108 Stat. 745, thirteen years later.  This later act of Congress prohibits the Department of Transportation from enforcing subsection (a), making it at best advisory and more likely void of legal effect.  Subsection (a) is a historical anomaly that violates the will of Congress.  It’s still on the books because the Department of Transportation has been too lazy to remove it.  Passively keeping subsection (a) in the Code of Federal Regulations also serves the interest of the pipeline industry, because it adds confusion to this complex area of law.

Now for a basic rule of law.  The language of a statute (such as the Pipeline Safety Act) always takes precedence over the language of a regulation (such as Section 195.210 of the Code of Federal Regulations).  Regulations must be interpreted by agencies and the courts in accordance with the meaning of a statute.  The Pipeline Safety Act clearly states that PHMSA may not determine the “location or routing” of a pipeline.  Therefore, PHMSA may not issue or enforce a regulation that allows it to determine pipeline location or route, nor may it interpret an old regulation to give it authority that was taken from it by Congress.  If Congress changes the law, the agency that implements the law must abide by the new law.

Turning now to subsection (b), it states that if a pipeline is constructed within 50 feet of a structure, it must be buried beneath an additional 12 inches of cover.  Here’s the full and exact language of this regulation:

“(b) No pipeline may be located within 50 feet (15 meters) of any private dwelling, or any industrial building or place of public assembly in which persons work, congregate, or assemble, unless it is provided with at least 12 inches (305 millimeters) of cover in addition to that prescribed in § 195.248.”

This regulation does not prohibit construction within 50 feet of a structure, which is what a setback would do.  Pipeline developers are free to build a pipeline within 50 feet of a structure, or not.  Instead, this regulation is a depth of cover requirement.  It says that if a pipeline is routed closer to a structure than 50 feet, then the builder must dump another 12 inches of dirt on top of it.  That’s not a setback.

One could dream up an argument that subsection (b) implies that pipelines must be allowed within 50 feet of a structure if a pipeline company could not add another foot of dirt on top.  However, such interpretation would violate the plain language of the Pipeline Safety Act, Section 60104(e) prohibiting PHMSA from regulating the “location or routing” of a pipeline, for safety or any other reasons. PHMSA can’t issue a setback or interpret a regulation to be a setback.  And, practically speaking, pipeline developers always have the capacity to dump another foot of dirt over a pipeline, so there are never situations where a pipeline must be built further than 50 feet from a structure.

No federal law exists that regulates the routes of oil and CO2 pipelines on private and state-owned land.  Some federal laws, such as Section 404 of the Clean Water Act, the Rivers and Harbors Act, and laws regulating construction on land actually owned by the federal government (for example, national parks and forests), control the route of a pipeline at particular locations.  However, these laws do not grant any federal agency the authority to generally determine the route of an oil or CO2 pipeline on private, state, tribal, or local government lands.  Also, the President may determine the location of a pipeline’s crossing of an international border under Constitutional powers to regulate international affairs, for example the Keystone XL border crossing.  However, the President cannot dictate oil or CO2 pipeline route within the United States.  The President’s authority is limited to determining the location of pipeline border crossings with Canada or Mexico.

In the absence of federal authority to determine the route of oil or CO2 pipelines, under the U.S. Constitution this authority remains with the states.  Accordingly, many states regulate oil and/or CO2 pipeline route, including but not limited to Iowa, Nebraska, North Dakota, Minnesota, and Illinois (see descriptions and links, below).  No reasonable argument exists that state routing of oil and CO2 pipelines is preempted by federal law.  Other states, such as South Dakota and Kansas, have voluntarily chosen not to regulate pipeline location or route, but that’s on them.

If a state law does not prohibit a county from regulating the route of a pipeline, the county may determine its location just like it can any other land use, including via setbacks or determining the route of the pipeline through the county.

If neither a state nor a county regulate route, and the state has given pipeline companies the power of eminent domain, then a pipeline developer can by itself choose the route, and landowners have no say in this decision.

The issue of whether or not state law allows a county to issue a setback for oil and CO2 pipelines varies by state, and for some states determining the scope of county authority requires an analysis that can’t be squeezed into a single blog post.  As a start:

The situations in Iowa, Nebraska and Illinois require more discussion than will fit into this blog, but I hope to write about the boundary between county and state routing authority in future blog posts.

Ultimately, county officials should consult with their county attorneys about the scope of county authority over CO2 pipeline setbacks and route. This blog post will give them a head start. They should request a formal written memorandum rather than a shoot-from-the-hip opinion, because pipeline law is obscure and complex, so sometimes even lawyers are misinformed.

Many states have long-standing routing laws under which they have routed multiple pipelines for decades.  For example: