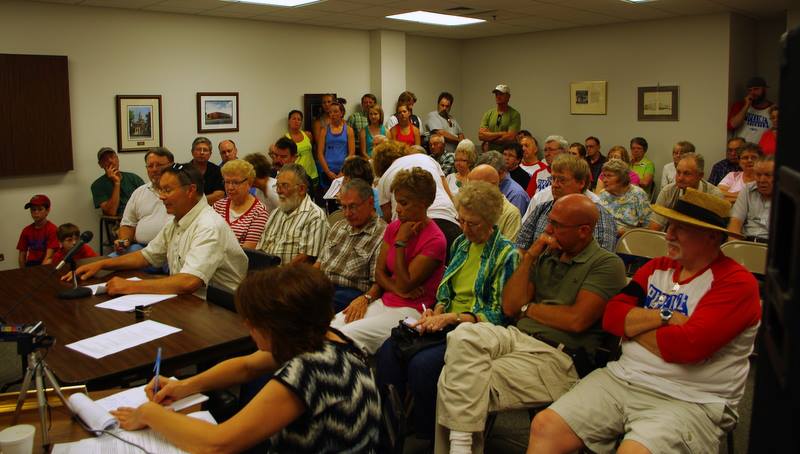 A year ago, landowners, Tribal Nations, and grassroots groups started to get phone calls about a new threat – carbon dioxide pipelines. On the surface, it might sound good — less carbon emissions in the air — however, we quickly learned that carbon pipelines are a climate scam that pose a serious danger when they rupture. Communities are pushing back with legal and grassroots actions.

In an ideal world, states and the federal government would ban the abuse of eminent domain for private gain, and establish clear laws around easement terms, pipeline decommissioning, setbacks and emergency response. The reality is, none of this exists for the new threat of carbon pipelines, so much of the responsibility lies on the shoulders of county governments.

Counties are empowered to take action to protect their communities from the dangers of proposed carbon dioxide pipelines, despite threats of legal action from pipeline corporations.

Bold Alliance has produced a Model County Ordinance for Carbon Pipelines that county officials may review and consider as a basis for crafting their own ordinances. (Note: The Model County Ordinance language was produced based on Nebraska‘s unique laws. If you’re a landowner or organizer interested in obtaining draft county ordinance language for your state, please contact us.)

State lawmakers in the impacted states are also introducing legislation during their 2023 sessions aimed at regulating carbon dioxide pipelines, including preventing the abuse of eminent domain for these projects that serve no public good. Bold’s Pipeline Fighters Hub and the Easement Action Teams are serving as a convener and assisting state-based groups and landowners with education, legal structures, and tools.

We have endeavored to create a tracker here, to monitor ongoing efforts by states and counties at the behest of landowners and community members.

Navigator Heartland Greenway filed a permit application with the Illinois Commerce Commission in July 2022 to build a carbon pipeline through 13 counties. On Jan, 20, 2023, Navigator filed a motion to withdraw its permit application at the ICC, claiming it intends to re-file in February 2023.

Notably, ICC staff recommended the agency deny Navigator’s motion, citing the statutory 11-month deadline after an application is filed, and further that “Administrative efficiency supports the denial of HR243’s Motion to adjust the start of the statutory clock. Litigation over a motion for extension of a statutorily-mandated deadline – which, as seen above, cannot be granted in any case – unnecessarily complicates the proceedings and is an inefficient use of already constrained Commission time and resources, whereas adherence to the current schedule is more efficient and feasible as contemplated by the intent of the statute. Therefore, Staff supports following the existing procedural schedule as ordered by the ALJ.”

A growing number of Illinois counties have applied for intervenor status in the ICC proceedings, while counties including Morgan have filed objections over eminent domain with the ICC:

Advocates in Illinois are pushing to introduce several carbon pipeline-related bills in the 2023 session, which are expected to be introduced in the coming weeks.

No lawsuits filed to date.

Top Republican leaders in the House and Senate have said they intend to introduce and back legislation during the 2023 session that will ban or impose a moratorium on the use of eminent domain for carbon pipelines, or perhaps impose a “threshold” on the percentage of voluntary easements that must be acquired before a company could apply to use eminent domain. Other concerns that are expected to be addressed in forthcoming proposed legislation include addressing landowner harassment by pipeline companies, better payment options for landowners who go through the eminent domain process, and changes to laws that address the surveying of property.

In May 2022, the Minnesota Public Utilities Commission (MN PUC) issued a ruling determining that it held authority to regulate carbon dioxide pipelines, and initiated a rulemaking to make its rules consistent with state and federal regulations. The MN PUC issued a determination in January 2023 that carbon pipelines must undergo a full Environmental Impact Statement (EIS) review process overseen by the agency, which includes a public comment phase. No schedule for public hearings has yet been determined.

No lawsuits filed to date.

Nebraska’s current laws provide for no regulatory oversight of carbon dioxide pipelines, and no state agency is tasked with any permitting or review process. For oil and gas pipelines (such as the proposed but rejected Keystone XL pipeline), the Nebraska Public Service Commission would hold an evidentiary hearing and grant or deny a permit that would bestow eminent domain authority. In the absence of any governing statute for CO2 pipelines, the power of eminent domain for carbon pipeline companies is not determined in Nebraska, and no state agency is providing due process for landowners nor any oversight on the routing of the pipelines.

No lawsuits have been filed to date. We note that we are now currently in exactly the same situation Nebraska was in during the fight to stop the Keystone XL pipelines — before landowners and Bold filed lawsuits to get proper laws and a process in place for routing oil and gas pipelines — and we are prepared to do the same for risky carbon pipelines.

The North Dakota Public Service Commission (ND PSC) will hold an evidentiary hearing and permit review process for proposed carbon dioxide pipelines, not yet scheduled but currently expected in late summer or fall 2023.

Counties and States Can Regulate Pipelines (May 23, 2022)

How to Contact Your County Board About the Pipeline