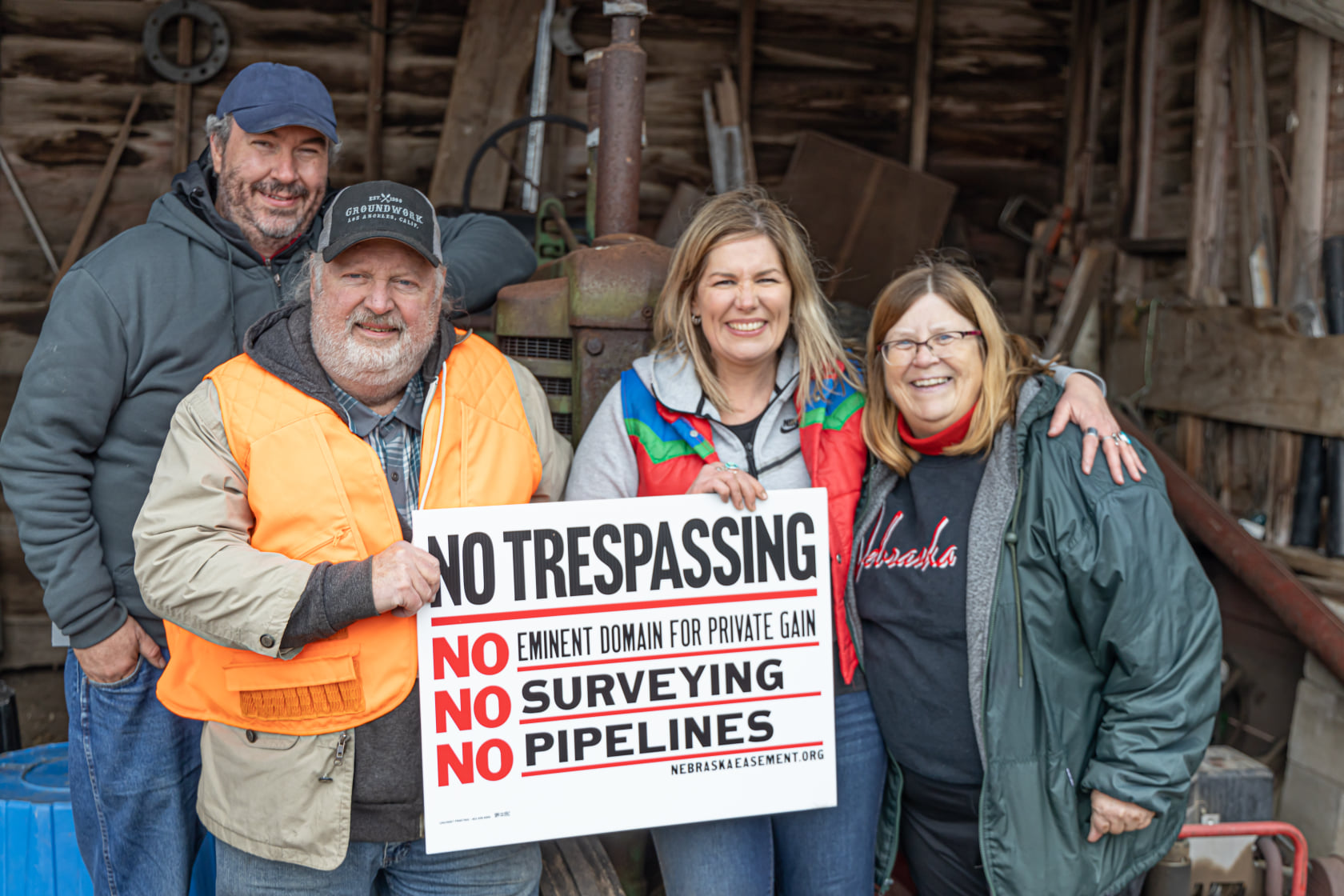 There is currently a goldrush to build “Carbon Capture & Storage” (CCS) and “Carbon, Capture, Utilization & Storage” (CCUS) projects across the Midwest, with a stated goal of helping improve the carbon emissions of local ethanol plants. The plan requires a massive infrastructure buildout of thousands of miles of new pipelines, which would tap CO2 emissions from Midwest ethanol plants and transport them via pipeline across five states to underground “sequestration” sites in North Dakota, Illinois, and other locations. Read more about the proposed carbon pipeline projects from Summit Carbon Solutions, Navigator CO2 Ventures, and Tallgrass Energy (“Trailblazer”).

In the event of a carbon pipeline rupture or leak, an explosive plume of CO2 gas can emerge, odorless and colorless, an asphyxiant that can suffocate all living beings, and prevent combustion vehicles like cars from starting to enable an escape to safety. At concentrations between 2-10%, CO2 can cause nausea, dizziness, headache, mental confusion, increased blood pressure and respiratory rate. Above 8%, nausea and vomiting appear. Above 10%, suffocation and death can occur within minutes. Contact with the cold gas can cause freezing of exposed tissue. Moisture in the air can lead to formation of carbonic acid that can irritate the eyes. CO2 is heavier than air and will accumulate in low lying areas.

A CO2 pipeline in Satartia, Mississippi ruptured in 2020, sickening dozens of people, causing some to appear as “zombies” and foam at the mouth, dazed from the asphyxiant gas, according to witnesses.

WATCH: The Pipeline Fighters Hub presented a webinar, CO2 Pipeline Safety: “The Gassing of Satartia, MS” & Aftermath on Aug. 9, 2022, focused on the critical safety concerns with carbon pipelines, and what can happen in the worst case scenario of a CO2 pipeline rupture — like what happened in Satartia, Mississippi in 2020. The discussion includes Dan Zegart — the journalist who covered the shocking details of the Satartia pipeline rupture that sent dozes to the hospital, and months later continued to cause health issues for the victims, in his story “The Gassing of Satartia.” The panel also features two first responders who were present on the scene at Satartia  – Jack Willingham, Director, Yazoo County Emergency Management Agency (Yazoo City, Mississippi); and Jerry Briggs, Warren County Fire Coordinator (Vicksburg, Mississippi).

Read: Journalist Dan Zegart’s critical reporting for the Huffington Post: “The Gassing of Satartia” on the CO2 pipeline rupture in Satartia, MS: 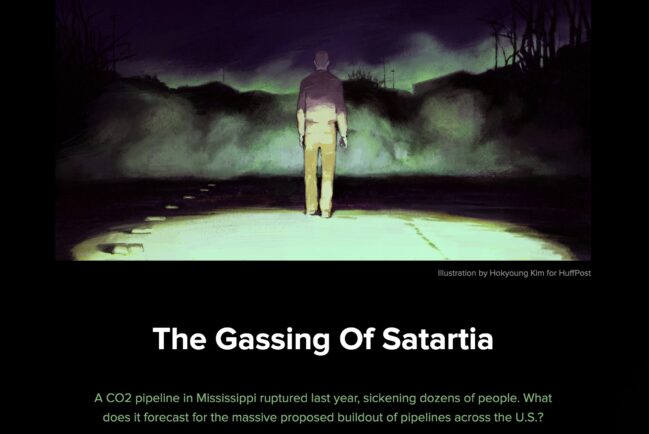 WATCH: This video shows a “controlled” intentional rupture of a buried, 8-inch CO2 pipeline at a facility in Norway (Det Norske Veritas), with a shockingly intense and large plume of CO2 rapidly dispersed throughout a wide surrounding area.

WATCH: The Pipeline Fighters Hub presented a webinar, “Carbon Capture & CO2 Pipelines,” on Aug. 25, 2021, featuring experts explaining the unproven technology and discussing its potential threats to communities and our environment:


“Perspectives on the State of Federal Carbon Dioxide Transmission Pipeline Safety Regulations as it Relates to Carbon Capture, Utilization, and Sequestration within the U.S.”, authored by Richard Kuprewicz / Accufacts:


Bold Alliance attorney and pipeline expert Paul Blackburn authored a Sample Resolution that counties can look to and adapt for their own use to protect their communities:

WATCH: The Pipeline Fighters Hub hosted a webinar, “Counties and States Can Regulate Pipelines” (May 23, 2022) that outlines exactly what counties are legally empowered to take, from defining “setbacks” to a moratorium on new projects, and includes participation from county board representatives from Iowa and South Dakota who have voted to regulate carbon pipelines in their communities:

Based on experience with the Dakota Access Pipeline, the fertility of cropland can be adversely impacted for several (or perhaps many) years.

A 2021 Iowa State University study found “extensive soil disturbance from construction activities had adverse effects on soil physical properties, which come from mixing of topsoil and subsoil, as well as soil compaction from heavy machinery.” “Overall, in the first two years, we found the construction caused severe subsoil compaction, impaired soil physical structure that can discourage root growth and reduce water infiltration in the right-of-way,” said the lead soil physicist on the project. “They also found changes in available soil water and nutrients. The team found crop yields in the right-of-way were reduced by an average of 25% for soybeans and 15% for corn during the first and second crop seasons, compared to undisturbed fields.”

WATCH: Video presentation with Iowa landowners’ attorney Janet Holmes, documenting with slides the topsoil compaction and other destruction of farmland witnessed during construction of the Dakota Access pipeline:

Bold’s Paul Blackburn authored a blog post on the risks associated with converting an existing pipeline such as one used to carry fracked gas, to service for carbon dioxide. This is just what Tallgrass Energy is proposing to do with its Trailblazer gas pipeline. Read: “Risks of Converting Natural Gas Pipelines to CO2 Service” (March 24, 2022)

Bold’s Paul Blackburn dissected the 45Q tax credit that is the lynchpin driving the carbon pipeline goldrush across the Midwest in a five-part blog series. Read the first installment here: “Welcome to the 45Q Tax Credit Piggie Farm!” (May 24, 2022)

Paul Blackburn dug further into Summit Carbon Solutions’ plan for the carbon it wants to capture from Midwest ethanol plants, likely eventually to be used to help drill more oil through a process called “Enhanced Oil Recovery.” Read: “Why is the Summit Carbon Pipeline Going to the Middle of North Dakota?” (May 18, 2022)

In CCUS = the “U” stands for “utilization,” meaning the the fossil fuel industry “utilizes” the captured CO2 to help frack for more oil in a process called “enhanced oil recovery.” How is this a “climate solution” if the captured CO2 is being used to drill for more oil? Which will lead to more burning, and more emissions?

An Iowa landowner uncovered the shady partners and foreign ties to Summit Carbon Solutions, and filed an objection detailing her findings with the Iowa Utilities Board that show one of the company’s South Korea-based investors has been found guilty of defrauding the U.S. Government and fined $70 million, while Dan Lederman, the South Dakota Republican Party Chair who is also a registered lobbyist for the kingdom of Saudi Arabia with a $10,000 monthly contract, is also now a representative for Summit showing up at local county boards to support the project. Read: “Exposed: Carbon pipeline’s foreign ties & investors (Saudi, S. Korea)“ (July 29, 2022)

Silvia Secchi, a professor in the Department of Geographical and Sustainability Sciences at the University of Iowa who holds a PhD in economics from Iowa State University, authored an op-ed and report that rebuts point-by-point the positive economic impact studies that these carbon pipeline companies are currently touting before county boards:

Two kinds of goals drive this practice. The first is to increase the social acceptability of the pipelines, which often require formal environmental assessments because of their long and short-term environmental effects. Local landowners and environmental groups often oppose the projects, concerned about impacts on existing infrastructure like tile drainage, and on water and land resources. Second, if the pipelines are in line for subsidies, such studies help create the impression that the subsidies are justified. The inflated economics reports go back to the Trans-Alaskan pipeline in the 1950s and early 1970s, and the more recent infamous examples of the Keystone XL and the Dakota Access pipeline. The tricks in the consultants’ playbook have largely remained the same. In this post, I will discuss several issues associated with the report that Ernst and Young prepared for Summit Carbon Solutions.

A July 29, 2022 letter from 17 academics, farmland owners, and environmental advocates to the Iowa Utilities Board laid out four science-based objections to carbon pipeline projects. Citing “relevant scientific and engineering studies,” the letter explained how the pipelines would damage soil and crop yields without significantly reducing greenhouse gas emissions. Allowing the use of eminent domain for this project would be “a betrayal of public trust and a corruption of the ideal of private sacrifice for public good,” the letter argues:


The “carbon capture” boondoggle enables Big Oil & Gas (and even coal) to keep drilling, burning, and increasing emissions, while failing as a technology to actually help reduce emissions and the impacts of climate change.

Congressional Briefings on CCS and CCUS: Bold Alliance helped produce a series of Congressional briefings on CCS technology, along with the Center for International Environmental Law, Food & Water Watch, Friends of the Earth, Indigenous Environmental Network, Institute for Policy Studies Climate Policy Program, Oil Change International, Pipeline Fighters Hub, and The Science and Environmental Health Network. These briefings that look at the regulatory environment, funding, public health impacts and provided a big picture overview of CCUS and Hydrogen development. Participating in the briefing were frontline leaders, policy experts and academics, who we also owe a great deal of appreciation for their work to pull these presentations together. You can watch the videos below:

FracTrack Alliance created an interactive map that shows all of the currently proposed carbon pipelines in the Midwest, and the associated ethanol plants and emissions that are proposed to be sequestered: