One wonders, why is Summit Carbon Solutions’ “Midwest Carbon Express” pipeline proposed to go all the way to the middle of North Dakota? What’s so special about this particular location? First, check out Summit’s overall project map. It shows that the pipeline will extend into west central North Dakota. 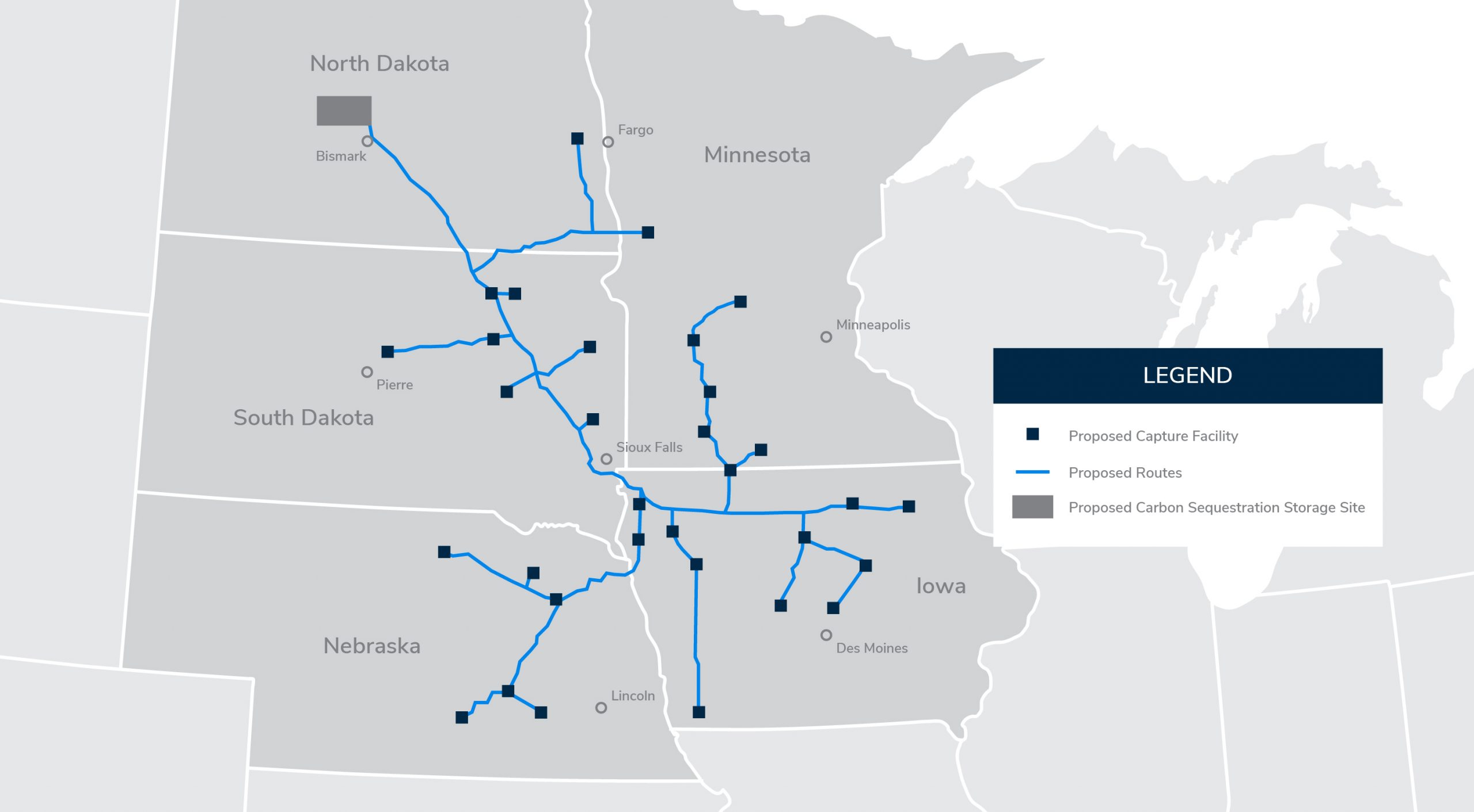 So, where specifically is the sequestration site in North Dakota? The map of North Dakota’s counties show that it’s the border area between Oliver and Mercer Counties (the red oval on the county map shows this general area).

These maps show that the Deadwood Formation extends quite far east, whereas the Broom Creek Formation goes just past the eastern edge of Oliver County. Incidentally, Summit just entered into an agreement with Project Tundra to sequester CO2 at its wells. 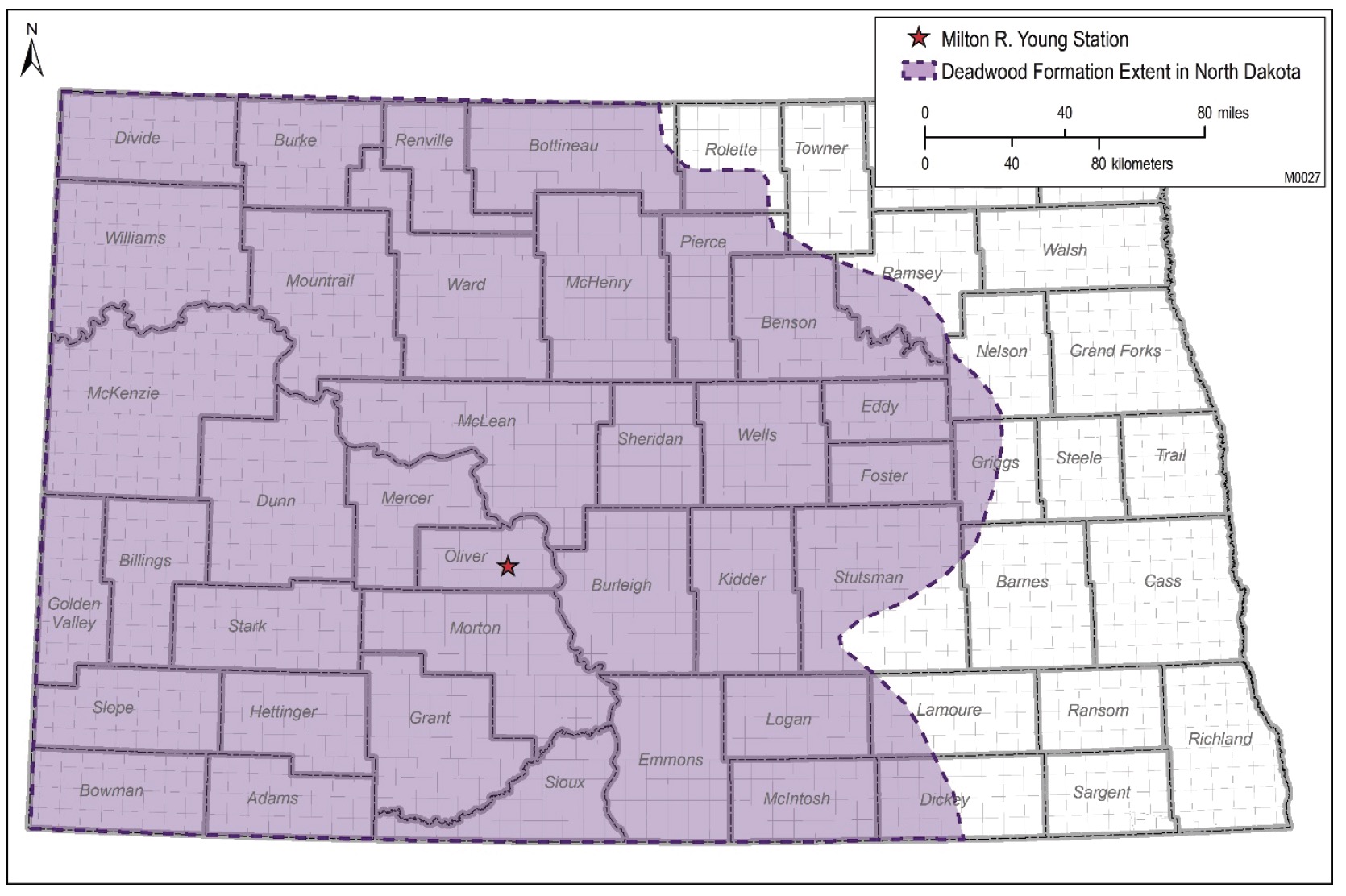 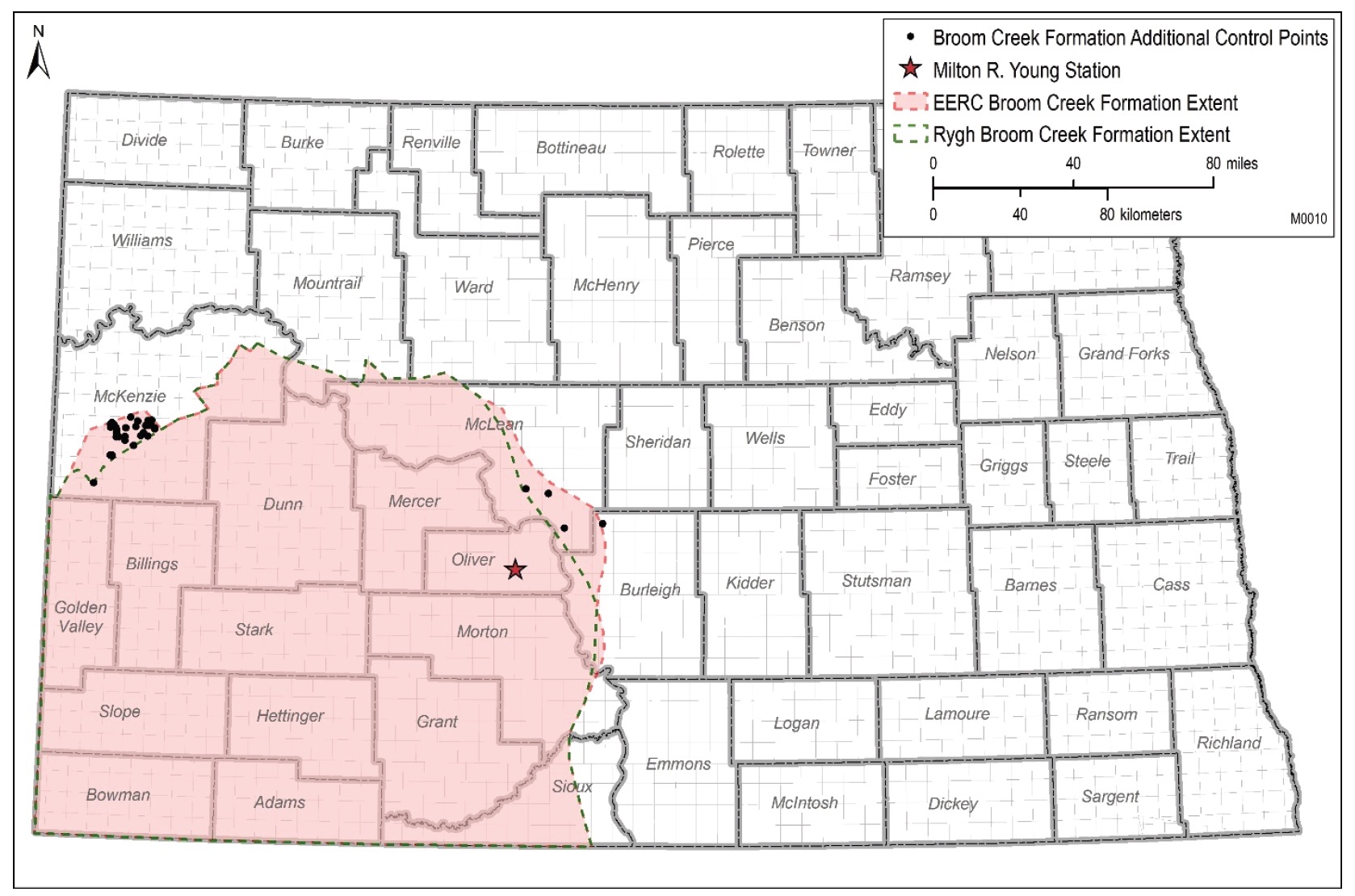 The US Geological Survey (USGS) website also shows geologic sequestration areas in North Dakota. The tan area is considered suitable for sequestration, and it’s similar to the Deadwood Formation map, above. The USGS also shows the number of existing oil wells per square mile (the blue and yellow dots). It shows these wells because they penetrate the impermeable layers of rock that would supposedly keep the CO2 underground. The more oil wells, the greater the risk that the CO2 could leak out. The red oval shows the approximate area of Summit’s proposed sequestration site.

Considering all of these maps, it appears that there is substantial suitable sequestration geology at least 100 miles to the southeast of Summit’s proposed sequestration wells.

Why build 100 additional miles of expensive pipeline? What’s so special about the border area between Oliver and Mercer Counties? 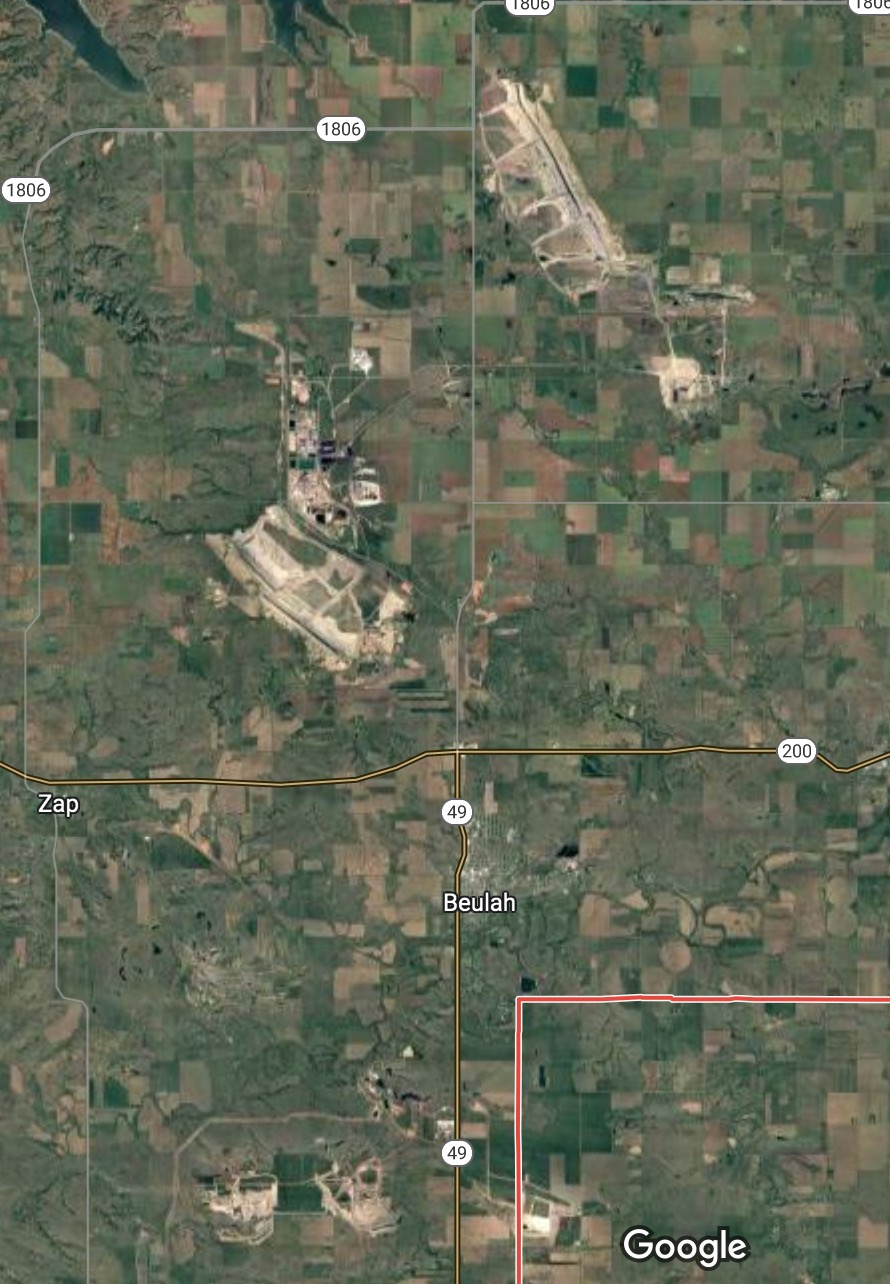 The Google map for this area shows all of this coal-related infrastructure. To check it out, click on this link and zoom in. The light-colored areas on the map are active coal mines, but there are also areas of land that used to be mined that are now replanted and harder to see (but can be seen in historical images on Google Earth Pro). The Dakota Synfuels Plant and Antelope Generating Station are on the north side of the mine to the northwest of Beulah. The smaller mines south of Beulah are all part of the Coyote Creek mine.

The Coyote Station power plant is just north of these mines. The red line shows the border between Oliver and Mercer Counties.

What about the existing CO2 pipeline? The green map shows the US portion of the route of the 205-mile 14-inch diameter Souris Valley CO2 Pipeline, which runs from the Dakota Synfuels Plant to a CO2 EOR operation at the Weyburn oilfield in southern Saskatchewan. 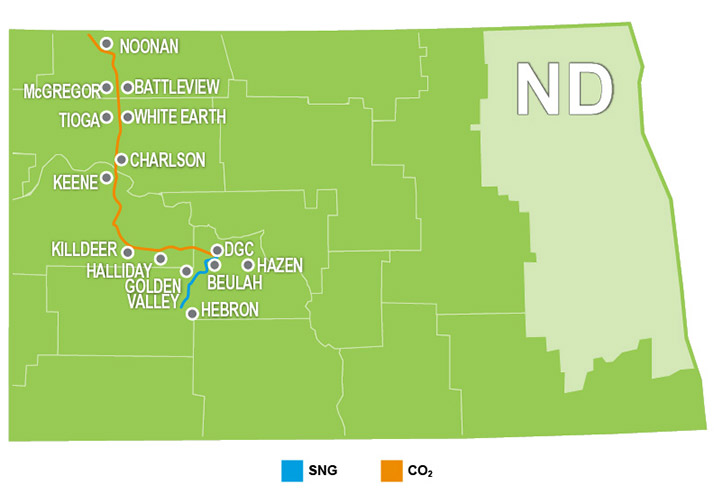 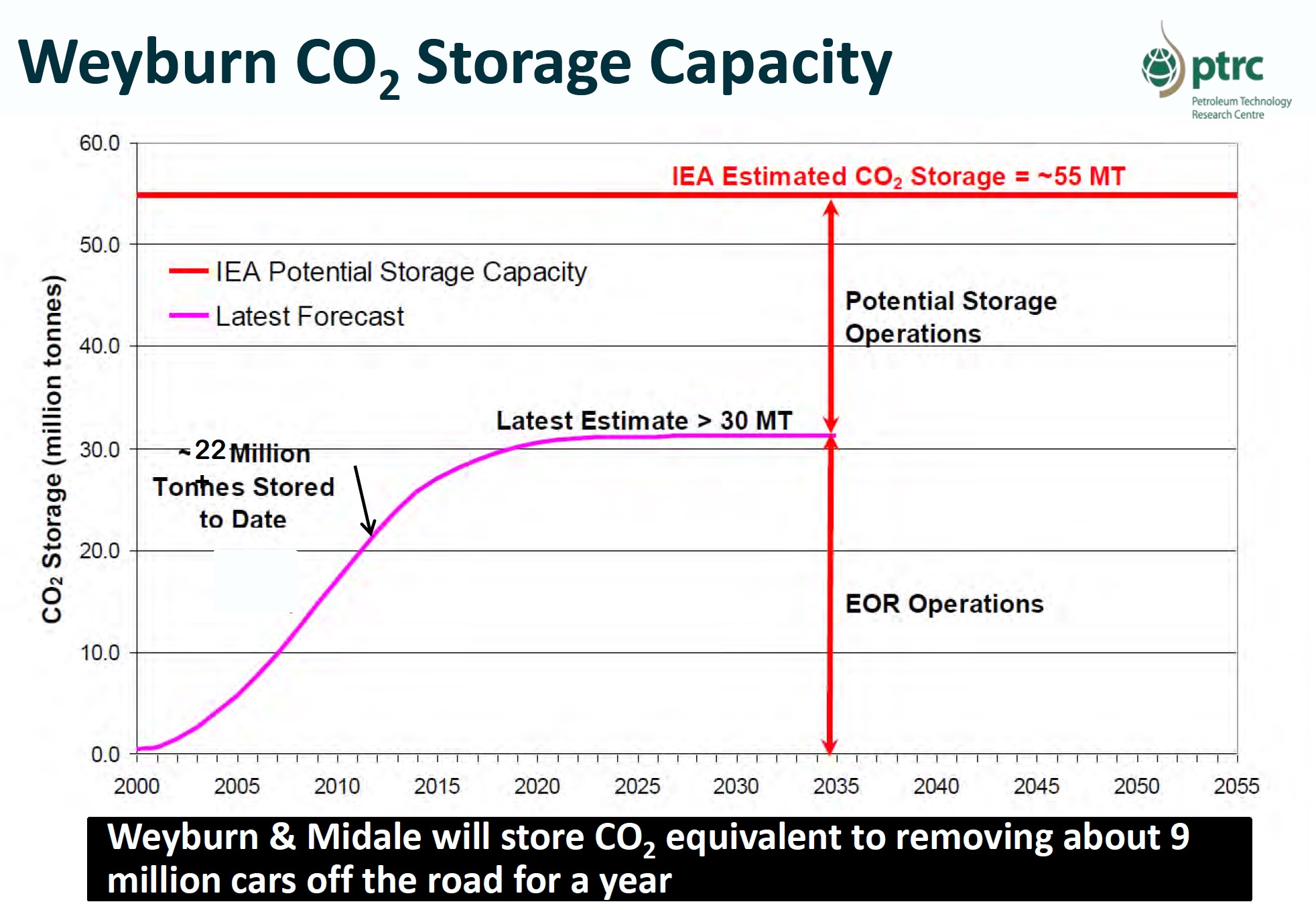 The future of this pipeline appears to be uncertain, because the Weyburn Field may be exhausted within a few years. Here’s a chart from a 2015 study showing a forecast of the total amount of CO2 that may be needed by the Weyburn field. The pink line shows accumulated CO2 used for EOR. It flatlines about 2020, implying that CO2 deliveries to this oilfield might soon end.

The Weyburn EOR project might have figured out how to get more oil out of the ground and therefore need more CO2. Nonetheless, the storage capacity chart indicates that EOR operations at Weyburn won’t last forever.

It is also possible that the Weyburn site could be used for pure geologic sequestration. The red line shows the maximum potential sequestration capacity beyond that needed for EOR. It is unlikely that CO2 would be shipped from the US to Canada for sequestration, because the US 45Q tax credit that would pay for sequestration only applies to CO2 captured and sequestered within the US.

Therefore, it seems likely that the synfuels plant would not gain any financial benefit from sequestering CO2 at the Canadian Weyburn oil field, absent EOR. If the Weyburn EOR project stops buying CO2 from Dakota Synfuels, presumably the Souris Valley Pipeline would need to stop operation – unless some new EOR or sequestration projects were developed along this pipeline’s route.

However, the future use of the Souris Valley Pipeline is also in doubt because the owner of the synfuels plant announced that it may sell the plant to a new owner, who would convert it to a “blue hydrogen” plant.

So, if the gasification plant shuts down and/or the Weyburn oilfield stops buying CO2, what happens to the Souris Valley CO2 pipeline? 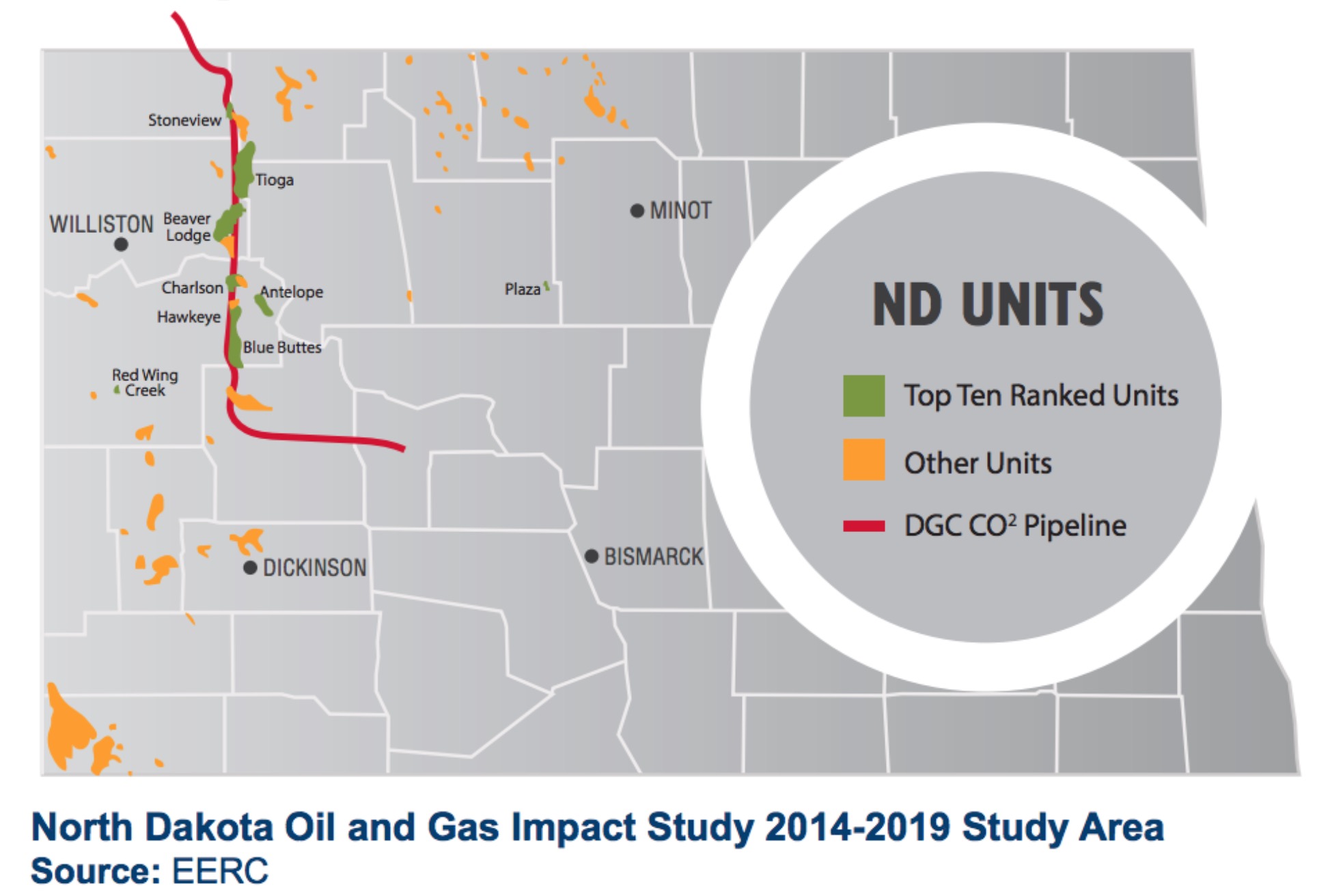 Now, that you know something about all of this existing coal and pipeline infrastructure, look again at Summit’s map of its sequestration site. Ignore the scale, exact location, and orientation of the sequestration sites, because Summit may have intentionally distorted this map to hide its intentions, but notice the miles of pipeline length between the sequestration sites: 4.73 miles, 3.68 miles, and 10.69 miles. Each of these distances is specified to the nearest hundredth of a mile (52.8 feet). Summit could not have generated these exact distances unless it knows precisely where it plans to put its sequestration hub and wells.

There are a number of potential reasons why Summit might have chosen the border area of Oliver and Mercer Counties for the terminus of its proposed pipeline and sequestration wells:

1. The coal mines own a lot of land that could be used for CO2 sequestration, including active mine sites, reclaimed sites, and possible future sites. These mines would not affect the sequestration, because they are shallow strip-mines, whereas the CO2 would be injected at least a mile underground. Using the coal mines’ lands for sequestration could be important because under North Dakota law, if a sequestration site developer can acquire 60% of needed land through voluntary agreements, NDCC § 38-22-08.5, it can acquire the remaining land through eminent domain. NDCC § 38-22-10. https://ndlegis.gov/cencode/t38c22.pdf. If Summit can acquire 60% or close to 60% of the North Dakota land its needs for sequestration from coal mines, this would make it much easier for Summit to force the rest of the landowners in the sequestration area to have their land be used for storage against their will.

2. If the Dakota Synfuels Gasification Plant goes offline, the Souris Valley Pipeline would no longer have access to CO2 to transport north to either the Weyburn EOR field or possibly to one or more of the “top ten” potential EOR projects in North Dakota. In this case, the pipeline’s owner would no longer earn money and would just need to abandon it. It seems likely that the pipeline’s owner would much rather connect to the Summit pipeline so that it could ship CO2 to potential EOR projects and keep making money. It would not be expensive or difficult to build a connection from Summit’s sequestration hub to the start of the Souris Valley Pipeline.

3. If the Weyburn EOR project in Canada stops or slows operations, and to the extent that new EOR projects are not developed along the Souris Valley Pipeline, then the CO2 from the synfuels or blue hydrogen plant could be sequestered in Summit’s sequestration wells. Dakota Synfuels reports that at most the Souris Valley Pipeline can transport up to “about two-thirds of the readily available CO2,” meaning that CO2 is likely available for sequestration even if the Weyburn EOR project continues operating. In either case, the Summit sequestration site would provide the synfuels/hydrogen plant with a new source of revenue and/or tax credits.

4. The corporate entities that would own the CO2 captured in Iowa, Nebraska, Minnesota and North and South Dakota and shipped through the Summit Pipeline are not required by government regulation to sequester this CO2. Instead, they can decide on an ongoing basis whether it is used for EOR or sequestered. The IRS requires only that the owner of the CO2 declare the amounts sequestered or used for EOR during the past tax year on their annual income tax returns. Although the $50 per metric ton tax credit for sequestered CO2 is higher than the $35 per metric ton for CO2 used for EOR, a CO2 owner would likely gain a greater financial benefit by shipping it to an EOR project, because the EOR company could pay between $25 and $40 per metric ton for the CO2. This payment would be in addition to the $35 per ton tax credit. Therefore, the total financial benefit for shipping CO2 to an EOR field could be in the $60 to $75 per metric ton range, significantly more than the $50 per metric ton sequestration credit.

6. If Congress makes the 45Q tax credits for CCS even more generous, then CCS may become financially viable at the Coyote and Antelope Station power plants. Having active sequestration wells near these coal-fired power plants would reduce the cost and accelerate development of CCS projects at these plants.

Ultimately, Summit is in business to make money, and it should be expected to jump at any option to maximize its profits. While Summit may have no expectation in the near-term that its CO2 would be used for EOR, nothing in federal law would prevent such use. Even if private contractual conditions exist to sequester the CO2, such contracts could and likely would be amended if there is money to be made. It could be that Summit at first injects CO2 into long-term geological storage. Then, once a steady supply of CO2 is assured, whoever owns the carbon capture equipment could begin selling CO2 to EOR projects to pump even more oil (and carbon) out of the ground.

That would be a bait and switch.